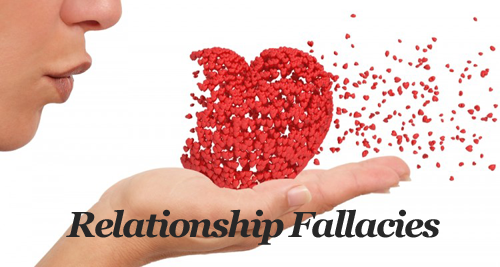 When you set out to learn about creating love, you will discover and confront a whole raft of relationship fallacies and negative models that influence your beliefs about what is possible. Dismal examples abound from high profile, highly esteemed role models, such as political and business leaders, and film and sports celebrities. Here are some common relationship fallacies. Which ones form part of your personal arsenal, sabotaging your capacity to realize the fulfilling love you want?

We have done our own fair share of succumbing to relationship fallacies. Al was convinced that the delight of our relationship was too good to last. Based on his previous experiences he feared it would sooner or later become boring or unstable. He did not believe, for example, that we could continue to have magical candlelit dinners with stimulating conversation that led to fevered lovemaking. At some point that magic would fade. But, when he shifted from assuming that the circumstances generated his enchantment to knowing that his intention and active participation did, that constricting belief disappeared. Wining and dining and loving each other up remains a favorite and wonder-filled pastime.

Pala fell into the “I have found the one to complete me” trap, the myth of love described in Plato’s Symposium, wherein original man was split in two by an angry and vengeful god and so is always searching for his other half—“human nature was originally one and we were a whole, and the desire and pursuit of the whole is called love.”

She found in Al a wonderful lover, a provoking intellect, a thoughtful nature, and a spirit for growth. She believed these attributes of his would satisfy her needs—because he was a good lover they would have great sex, because he had a challenging mind she would be creative in her thinking, because he wanted to continually learn her intellect would expand. It was a short step to making him responsible for the quality of their sex, the liveliness of their discussions and the creativity of their learning. Now she understands that what makes a whole relationship is two whole people, each responsible for contributing all they can, individually, to grow together.

Carefully examine your own ingrained assumptions about relationship and how they affect your hopes and your actions. Recognizing your self-limiting beliefs is a first step toward changing them.