Calling Each Other on “Stuff” 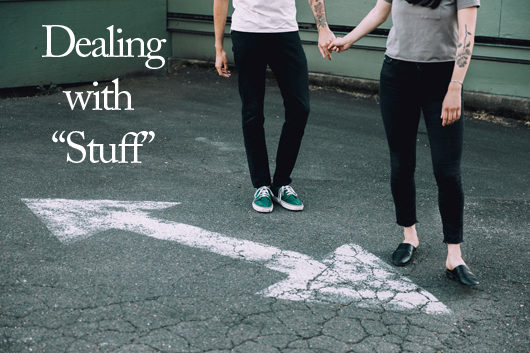 Calling Each Other on “Stuff”

Al says, “I get in ornery, crappy moods, and there is no logical rational reason for it. If Pala is in the same room, she gets a sour look or a harsh, disrespectful tone of voice.”  Pala says, “Usually he isn’t even aware of it!” Because we both want to be as aware in every moment as we can be, we have given each other permission to bring it to the other’s attention if either of us is being unpleasant without any apparent reason. When we call each other on a negative energy mood, we do not say.” Don’t speak to me in that tone of voice you jerk!” Even though that may be our first thought. Rather we reveal the hurt or concern beneath the irritation, like this: “The way you are looking at me makes me feel very uncomfortable, even frightened,” or “the tone of your voice is harsh, I feel you’re judging me, dismissing me, rejecting me, or attacking me. Is that your intention? Is there anything that I have done or said? Is there an issue we need to work on right now?”

We both want to make our relationship work, and want to be in a positive energy space as much of the time that we’re together as possible. When Al asks Pala about a negative emotional state in a non-confrontational way, she has the option of becoming aware of the space she’s in and can choose to come out into a more loving, calmer space. Making the choice to move into the positive requires desire, self-discipline and a sense of humor. It’s not always a rapid transition. As Al admits: “Sometimes I am so deep in my “stuff” that I feel justified in feeling bad and want to stay there! In such a situation I go away from Pala so that my mood won’t be inflicted on her. Then, because I’m not getting any attention for it, and there’s no one to fight with, I can usually see my folly and return quite quickly to a better state of mind.”

When either of you notices the other is arbitrarily in a bad mood, do not ignore it as if this ill humor doesn’t matter. Bring to your partner’s attention the effect that her sullenness is having on you. It is important to show your own vulnerability by sharing how you are affected emotionally. For example: “When you speak to me with that tone of voice it makes me feel very insecure and afraid that I have done something wrong.” If all you reveal is that her moodiness makes you angry and want to fight, there is a good chance that’s where you’ll end up. If you find out there is indeed a particular reason for her upset, then you have the opportunity to resolve it immediately rather than letting it fester away, poisoning your relationship.

How to Call Each Other on “Stuff” Effectively